On the first day of our training, Freshte was the only woman in our course. I thought, I hope she will come back and we will not scare her off. She introduced herself, told us that she has lived in Berlin for three years. She came with her husband and three children from Iran to Germany in 2015. And she showed the class her long way from Iran to Berlin on the map. She seemed shy and not comfortable to speak German at the time. But, to my delight, she came the next day to the training, and the next, and the next.

Freshte created her own digital story with determination. She carefully chose meanigful pictures and worked on the text that she wanted to record for the voice over. In the second week of the training, Freshte brought a friend to the course and supported her in creating her own digital story even though she had missed the first part. When the second module started, Freshte was eager to make interviews, beeing the interviewer but also taking over the camera. Even before, she had toyed with the idea to become a journalist or make another vocational training. 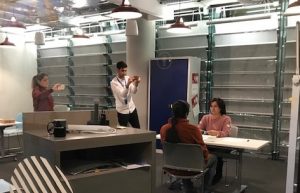 When the time came to prepare the event where the course participants teach seniors and other refugees in digital storytelling and coding with scratch (mixed group event), Freshte didn’t hesitate to volunteer for the group that conducted the workshop on digital storytelling. She and the two other course participants made a plan for the workshop and distributed the roles among them – like trainers do. On the day of the event, it became clear that her two fellow trainers could not attend the event and that Freshte had to do the workshop almost by herself (I was there as well of course, but still). She was afraid and nervous. But she came prepared and she knew how to make a good digital story. So, she conducted the workshops in German and she supported the participants with their questions like a trainer. This is her story about her experience:

“I want to tell you about this class. I learned a lot and it was fun. The event was very nice, I helped an older lady. At the event I showed them how to search for free pictures, download them and turn them into a movie. We made transitions between the pictures. It’s a new experience for me to be a trainer.” Freshte, February 2019″

At the end, an event participant who works for a local public organisation approached Freshte and asked to have  a meeting with her to discuss how they could work together in the future. The other participants at the event were equally impressed by Freshtes bravery and calm manner to explain the process of downloading free pictures and creating a video. I was very proud of her but I think she was even more proud of herself – justifiably.